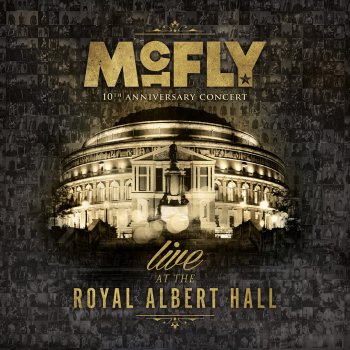 10 years have gone by, in the blink of an eye,
Time really seems to fly when you're in McFly
So thanks for coming here tonight,
I hope that we aren't playing shite
And if we are, please be polite, or Doug will cry
I wrote this song so that collectively we could get some perspective
Before we play and you scream, cheer and clap
So please allow me, if I may, to take you some place far away,
And quickly give a brief 10 year recap.
In 2001, I attended an audition and became the 4th addition to the Busted 1st edition
After 24 hours, those frickin' Busted bastards
Kicked me out and told me I was not what they're after
But I'd have done the same if I was in their position,
But I'd have kicked the one out with the eyebrow condition
That wasn't the end, no, it didn't stop there
In 2003, up in Bolton somewhere
I met someone with talent oozing out of his bones,
That's right folks, he was called Danny Jones
His skills on the guitar really are quite insane,
But what balances his talent is his microscopic brain
He agreed that him and me should write a bunch of songs,
So we got a record deal and here's where it goes wrong
We held an audition and two guys came along,
Called Dougie and Harry, and that's how McFly was born
Being McFly is pretty awesome, you get to do radical things
Like touring round the world from Madrid to Brazil,
Or building schools in Africa for kids that are ill
Yes, everyday is different but equally thrilling,
There's no way of knowing what tomorrow will bring
Being McFly is pretty awesome, it's not very hard to see why
It's so awesome being M-C-F-L-Y
Being McFly is pretty wicked, but I am just one of four guys,
I'm the only one who's not been on reality shows,
But if I did I'd know I'd be receiving your votes,
'Cause I can do the tango with some folks that are famous,
Or chill out in the jungle eating ostrich's anus
Or there's the Big Brother house, but I would never go in,
'Cause I'd rather sing some opera with Laurence Llewelyn-Bowen
Or I could stay home writing songs for One Direction,
In search for sing-alongable musical perfection,
And spend an hour admiring my Harry Potter wand collection
Dougie wants to add a joke in here about erections
But it's a family show, so I'm making some corrections,
For those penis eating, jungle swingers, ballroom dancing, opera singers
Being McFly is pretty awesome, it's not very hard to see why,
It's so awesome being M-C-F-L-Y
It's been M-otional
C-ms so F-fortless
I'd do it all again for the L of it
Just don't ask me Y
It's been M-barrassing
C-eems so F-ing stressful
But overall it's been de-L-ightful
It's hard to Y-ne
Every now and then the strangest things go on,
Like being on the cover of a gay magazine with no clothes on
But after 10 years of it, we just don't give a shit,
We will do anything, literally anything
We might even pull our trousers down and wave around our danglings
Being McFly is pretty awesome, but it's not been the easiest ride
Dougie went to rehab and thank God he came back,
I lost loads of weight and now I'm no longer fat,
And Danny's going bald so he might start wearing hats
We've had our share of tabloid covered exploited romance,
We still don't know if Harry really shagged Lindsay Lohan
Check me out, 'cause I can play piano with one hand
That's how awesome you become if you are in my band
You paid for the ticket so should probably buy a programme
Oh, being McFly is freakin' awesome!
But I am only one of four,
The other three are equally as awesome as me,
We're just about as awesome as a pop band can be
Our awesomeness is tangible, it's easy to see
Why we're so freaking radical, occasionally magical,
Dramatical, fanatical, for us, matter-of-factual,
It's actual, fantastical, contractual, we sold out shows!
There's no turning back at all from McFly
M-otional after 10 years
C - see my eyes are filling with tears
F - it's effortless
L - like elephants!
Y - 'cause we're awesome!
Just like McFly
M! C! F! L! Y!

Those Were the Days (The Lost Songs) [feat. Ximena Sariñana] - Single
2019